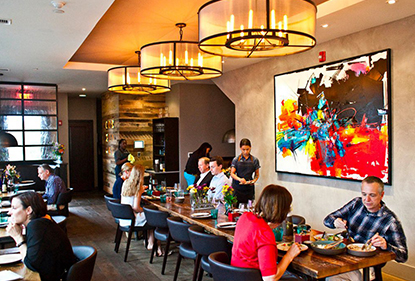 Two visits to Common Lot, a new restaurant in Millburn, convinced me that Ehren Ryan, an owner and the executive chef, is among the most talented cooks in the state. By May, only eight weeks after it had opened, Common Lot was booked for every seating on Friday and Saturday nights through July, and the restaurant does not take reservations more than 60 days in advance.

Mr. Ryan, 31, and his wife, Nadine Ryan, 27, the other owner and the manager, took three years to realize their vision. “We threw everything that we had into it — savings, inheritance and all that we had earned in 14 years of working,” said Mr. Ryan, who was born in Australia and worked his way up from dishwasher at age 15 to chef positions at Dinner by Heston and Sketch, London restaurants that have each received two Michelin stars. Ms. Ryan, a graduate of hotel management school in Austria, earned a certificate as a cheese sommelier in Europe and is devoted to tea. Note the spectacular Cynthia Rowley cups in which some of her teas may appear… Check out the full story here: NY Times Common Lot Review