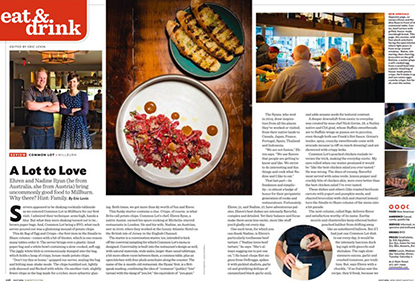 Ehren and Nadine Ryan (he from Australia, she from Austria) bring uncommonly good food to Millburn. Why : Family. 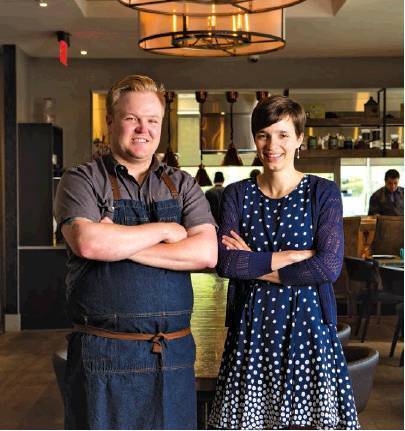 Servers appeared to be shaking cocktails tableside as we entered Common Lot in Millburn for our first visit. I admired their technique: arms high, hands a blur. But what they were shaking turned out to be… brown paper bags. And, Common Lot being a BYO, what each server poured out was a glistening mound of potato chips.

This $5 Bag of Egg and Crisps—the first item in the Smalls to Share column—comes with a bit of theater, which is one reason many tables order it. The server brings over a plastic-lined paper bag and a white bowl containing a slow-cooked, soft egg. The jiggly white blob is ceremoniously dumped into the bag, which holds a heap of crispy, house-made potato chips.

“Don’t try this at home,” quipped our server, sealing the bag and hitting max-shake mode. The chips tumbled out, lightly yolk sheened and flecked with white. On another visit, slightly fewer chips in the bag made for a richer, more sybaritic glazing. Both times, we got more than $5 worth of fun and flavor.

This funky starter contains a clue. Crisps, of course, is what Brits call potato chips. Common Lot’s chef, Ehren Ryan, a native Aussie, earned his spurs cooking at Michelin-starred restaurants in London. He and his wife, Nadine, an Austrian, met in 2010, when they worked at the luxury Atlantic Hotel on the British isle of Jersey in the English Channel.

The starter is a conversation starter, too, intended to kick off the convivial sampling for which Common Lot’s menu is designed. Conviviality is built into the restaurant’s design as well, with natural materials, wide aisles, larger-than-usual tabletops, a bit more elbow room between them, a common table, plus an open kitchen with four plush armchairs along the counter. The name of the 4-month-old restaurant, the Ryans’ first, is a Brit-speak mashup, combining the idea of “common” (public) “lots” (areas) with the slang of “you lot,” the equivalent of “you guys.” 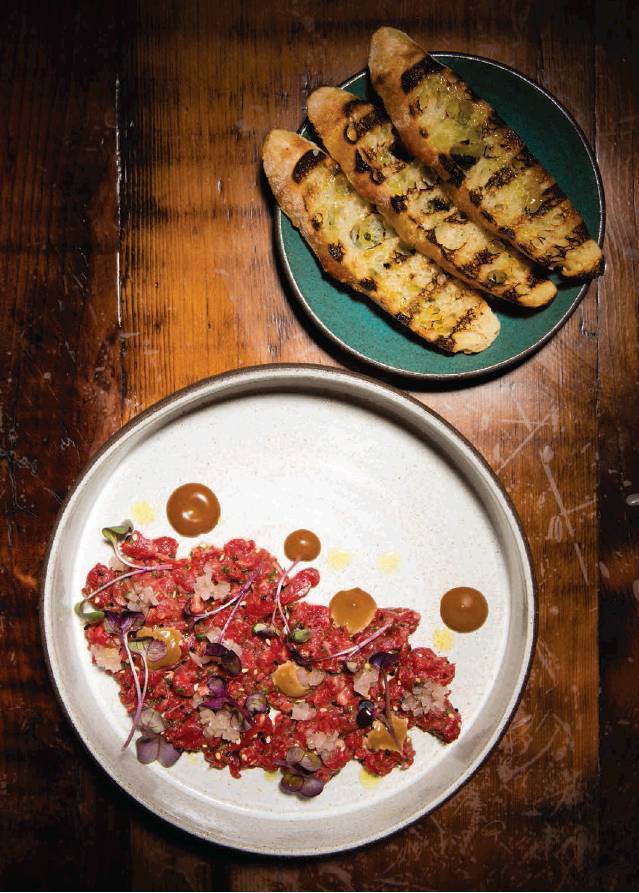 The Ryans, who wed in 2014, draw inspiration from all the places they’ve worked or visited, from their native lands to Canada, Japan, France, Portugal, Spain, Thailand and Indonesia.

“We are not fusion,” Ehren says. “We use flavors that people are getting to know and like. We strive to do interesting and fun things and cook what Nadine and I like to eat.”

That last part—its frankness and simplicity—is almost a badge of honor for their peripatetic generation of cooks and restaurateurs. Fortunately, Ehren, 31, and Nadine, 27, have adventurous palates. Ehren’s best dishes are intensely flavorful, complex and detailed. Yet their balance and focus make them seem less exotic, more like stuff you’d gladly eat every day. 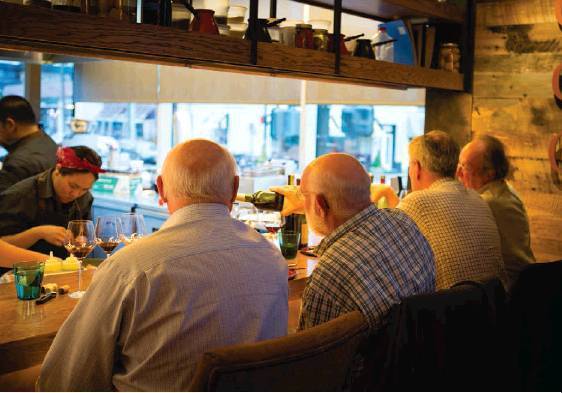 This page, the counter, with four plush armchairs facing the open kitchen, where light pours in from wrap-around windows.

One such treat, for which you can thank Nadine, is Ehren’s particularly toothsome beef tartare. (“Nadine loves beef tartare,” he says. “She’s always nagging me to put one on.”) He hand-chops filet mignon from DeBragga, spikes it with pickled shallots, garlic oil and gratifying dollops of caramelized black-garlic aioli, and adds sesame seeds for textural contrast. 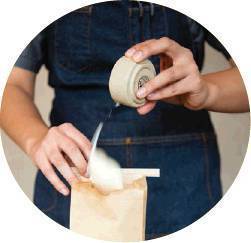 A deeper downshift from exotic to everyday was created by sous chef Nick Greiss, 28, a Nutley native and CIA grad, whose Buffalo sweetbreads are to Buffalo wings as pianos are to piccolos, even though both use Frank’s Hot Sauce. Greiss’s tender, spicy, crunchy sweetbreads come with avocado mousse (a riff on ranch dressing) and are showered with crispy leeks.

These dishes and others (like roasted heirloom carrots with yogurt and pumpkin seeds, and charred broccolini with chili and charred lemon) turn the Smalls to Share column of the menu into a hit parade.

The next column, called Bigs, delivers flavor and satisfaction worthy of its name. Earthy morels and chanterelles keep ethereal butter-poached halibut from drifting away like an untethered balloon. But if I had just one Common Lot dish to eat every day, it would be the intensely luscious duck leg ragù with gnocchi and shiitakes. The ragù slow-simmers onions, garlic and crushed tomatoes, per tradition. But, says Ehren with a chuckle, “if an Italian saw the recipe, they’d freak, because we reduce two or three cans of Guinness for the ragù instead of wine.” This kind of globalization is a good thing. 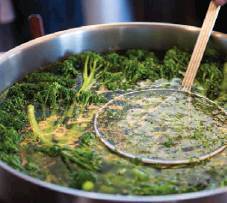 Below, simmering, charring, broccolini on the grill. Bottom, a waiter plops a soft-cooked egg from a small bowl into a plastic-lined bag of house-made potato crisps. 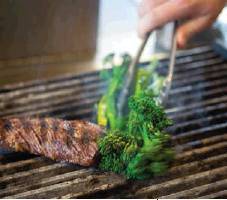 He’ll shake it up, comes eggycrunchy crisps, fun for all, even the waiter.

Speaking of global, you might be wondering how this well-traveled couple wound up in New Jersey, specifically Millburn. The short answer is that in 2006 Ehren’s parents moved from Sydney to Harding Township when his father, a partner in an international law firm, took a position in the firm’s New York office. Harding is about 12 miles west of Millburn, and Ehren’s parents have many friends in the area.

Ehren and Nadine, wanting their own restaurant, had priced the project in Australia, Austria and New York. But the only place that seemed affordable—and near family—was suburban Essex.

“My parents have friends in Millburn, and we walked around with them,” Ehren says. “They said they desperately need a restaurant there; they’re tired of going to New York for food.” 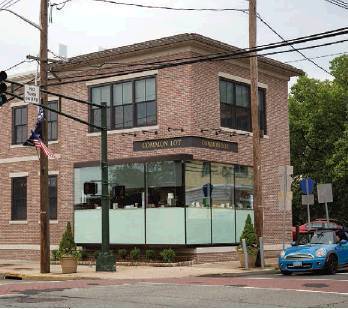 NO CUTTING CORNERS Inside the renovated building are delights like chicken roulade and, bottom, braised lamb shoulder with rice, cashews, lettuce and soy caramel. 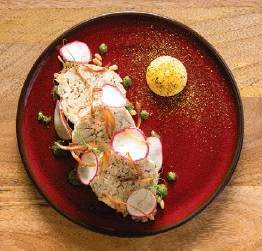 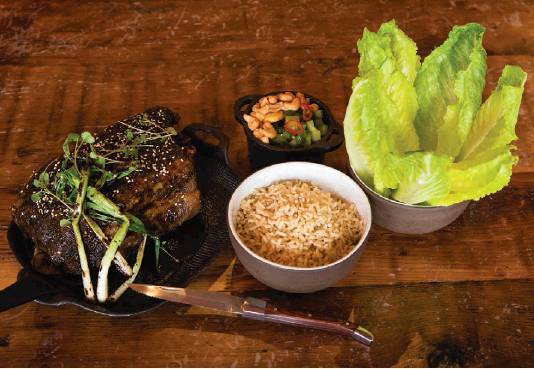 Friends of Ehren’s parents own what was a decrepit old building at Main and Essex Streets. “They were going to demolish it and put in apartments. We put our concept forward. It was very businesslike.” The owners renovated the exterior, while Ehren and Nadine sank everything they had into redoing the interior.

Guess which Common Lot dessert is a nod to Aussie and British tastes. Not the lemon semi-freddo, not the chocolate mousse. It’s the rice pudding. “It’s my mom’s favorite dessert, and a childhood memory for me,” Ehren says. He serves it warm, which is traditional, but with pistachio gelato, which is not. As with so much of Common Lot’s menu, the marriage of old and new works.