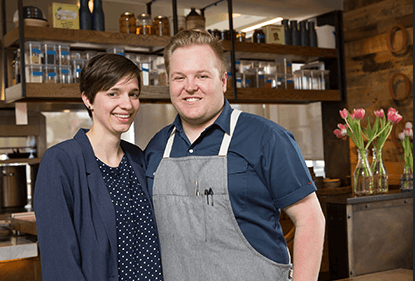 By Teresa Politano / For Inside Jersey

New Jersey is certainly diverse, as are our restaurants. Yet, most of our chefs are much alike in one distinct but important measure: They’re New Jerseyans. Even those who are from elsewhere have eased in — spending years here — growing up, working. Among the rare exceptions are those who share our altitudinal gradient; they’re from New York or Philadelphia.

He came to us via Australia, India, the Philippines, Canada and Hong Kong.

Most importantly, he came to us from a Michelin-starred kitchen in one of London’s most prestigious neighborhoods. Sketch is really three restaurants in one, an Alice-in-Wonderland experience, eccentric and quirky but still, and you sense it as soon as you walk in, steeped in a certain incalculable British propriety. You may not know the rules, and the rules may change nightly, but the rules certainly exist.

So, Ryan was nervous when he opened Common Lot in Millburn, unsure how we’d react to a menu that was more fine dining than not, in a restaurant with communal seating that was more casual than not. Not sure if we’d like his cheeky “bag of egg and crisps,” or respond to a chef whose previous customers counted themselves among the global elite in a city that prides itself on its innovative cuisine. Ryan is a cheese sommelier (yes, that’s a thing) who fiercely defends the rigor and discipline and the Escoffier sauces of a French kitchen. How would New Jersey respond?