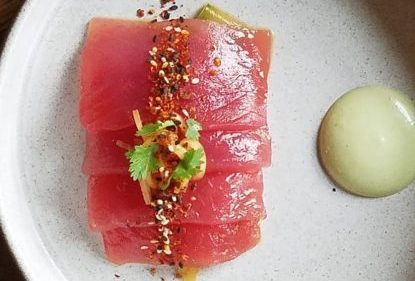 True voices in restaurants are in short supply. That is sad. Many diners don’t even know, let alone understand, what a voice in food is. They should come to Common Lot, to learn.

Cook fingerling potatoes, for example, in lamb fat, and that diner will be educated. Duck fat is the fat du jour, has been for more than a decade now in progressive restaurants. But lamb is inherently gamey, and potatoes, a crop that does best in cold weather climes, gain a brave new soul when cooked in something heartier, meatier than the fat of duck. We learn, then, through the Ryans’ rendition of this cunning “small-to-share” starter plate, that meat-and-potatoes, the Germanic-influenced mid-20th-century essential supper of suburban America, how the most basic of the basics can evolve. There is a bit more on the plate to emphasize the evolution: a wash of creamy, rich burrata, of piquant onions, and a little shrapnel—mere shots—of bacon marmalade to set the dish squarely in the 21st century… READ MORE