This casual, fine-dining BYO restaurant takes the open-kitchen concept to a new level, providing views of the action from inside as well as out.
By Rosie Saferstein | March 28, 2016 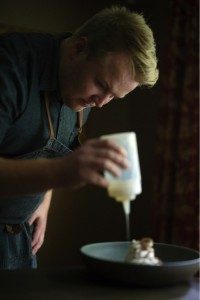 One of the most anticipated restaurant openings this year is Common Lot, at 27 Main Street, Millburn (973-467-0494), which will be opening tomorrow, March 29, by Australian-born chef Ehren Ryan and his Austrian wife, Nadine.

This casual, fine-dining BYO restaurant takes the open-kitchen concept to a new level, providing views of the action from inside as well as out—the latter through large plate-glass, street-level windows.

Chef Ryan’s life and career has taken him from his native Australia to India, the Philippines, Hong Kong, Canada, the Channel Islands, Austria, England and now the U.S. The Common Lot menu reflects these global influences while sourcing the freshest ingredients available from nearby purveyors like Urbana Greens, Mosefund Farm and No. Six Depot Roastery and Cafe. His wife, Nadine, a cheese sommelier and expert in the art of tea-making, is a restaurant manager, who studied front-of-house restaurant management at the Hotel Management School in her native Austria.

Common Lot will seat 34 on the main level w/an additional 28 in the upstairs dining room. The restaurant will initially open for dinner Tuesday-Saturday. The Kitchen Pass is an exclusive four-seat counter directly overlooking the kitchen similar to a Chef’s table, where the diner purchases the seat for the evening and is served dishes of the chef’s choosing.

The Ryans worked closely with Short Hills design collective Studio 1200 on renovating the property to better represent town history. For example, the brick exterior was chosen to reflect the mills that are the origin of the town’s name, while blending in with nearby landmark buildings from the early-20th century.