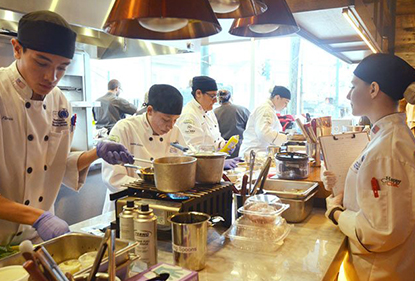 REPRESENTING THEIR HOME STATE, THE FIVE CULINARY STUDENTS FROM PASSAIC COUNTY TECHNICAL INSTITUTE WILL TAKE ON TEAMS FROM THE OTHER 49 IN THE PROSTART INVITATIONAL COMPETITION IN DALLAS. 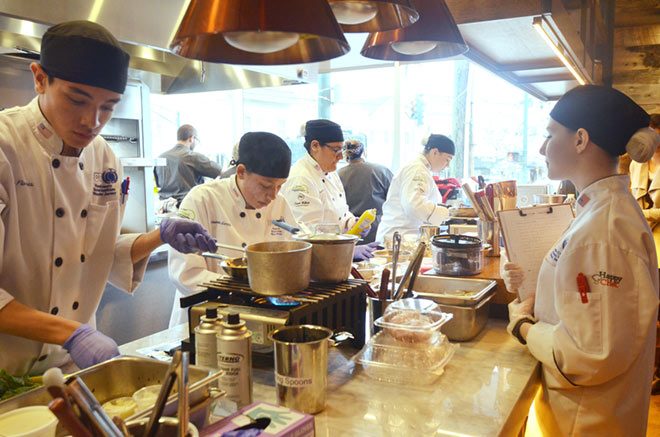 With help from chef Ehren Ryan, co-owner of Milburn’s newly-opened Common Lot restaurant, five teens from the School of Culinary Arts at Passaic County Technical Institute are about to compete in the finals of the National Restaurant Association’s 2016 National ProStart Invitational competition in Dallas, Texas.

The contest pits teams from high schools in 50 states.  Team New Jersey is Frankie Flores of Totowa,Jasmine Garcia of Haledon, Kathleen Ortiz of Hawthorne, Ashley Gulliksen of Haskell and Katherine Yakovlev of Wayne. They will compete against more than 300 other finalists for prizes that include full scholarships to post-secondary schools including the Culinary Institute of America.

Last fall, chef Ryan volunteered to mentor the group while he and his wife were riding out construction delays on Common Lot, the restaurant they were opening together.

With his help and lots of practice, they developed a three-course menu for the rounds of competition that would determine the New Jersey state representative to the ProStart finals.

The menu includes two portions each of a pan-seared scallop and pumpkin appetizer; an entree ofwhole roasted quail with faro risotto and Swiss chard; and a chocolate-peanut butter-caramelized banana torte, served with vanilla crème anglaise sauce.

The hitch is that everything must be made at top speed using the absolute simplest tools and equipment. 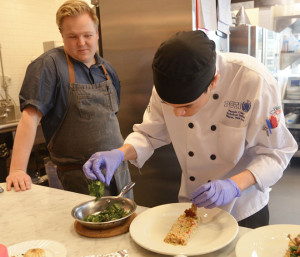 “What they produce in one hour is phenomenal,” says Ryan. “There’s basically no electricity. The kids have two gas burners to cook off of, and that’s it.”

Ryan’s own staff has called the conditions “barbaric.”

Nevertheless, back in January the group weathered the rigorous statewide competition, advancing to take their menu to Dallas on April 29th.

To help keep them focused, Ryan recently staged a mock contest at Common Lot, pitting his kitchen crew against the kids. In order to level the playing field, he handicapped his professionals with a mystery box of ingredients and no extra planning time.

At the state level, Ryan had seen many competitors get distracted by what other teams were doing,

“This pressure test,” he says, “was all about focusing and drowning out the exterior sounds and just doing your job as you would in a normal kitchen.”

The kids finished before the pros even got their dishes plated.

“They seem to thrive on pressure,” Ryan says.

“I’ve always wanted to give back and mentor kids,” says the chef. “There’s such a shortage of good chefs in the world. We have to inspire the next generation.”